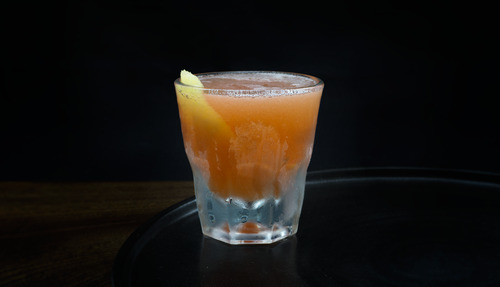 The blinker is an odd bird. It resides in the same neighborhood as offbeat classics like the Japanese, Seelbach, and between the sheets: recipes that don’t really make sense on paper—and maybe don’t make perfect sense in a cocktail glass either—but work just well enough to bring the adventurous drinker on a fun and weird ride. Perhaps a better comparison might be the lion's tail, since they both contain whiskey and unlike some of the aforementioned, are not only interesting, but really good too.

Originally published in The Official Mixer’s Manual, a somewhat exotic 1934 text by Patrick Gavin Duffy, The Blinker might have drifted off into history had it not been illuminated by Ted “Dr. Cocktail” Haigh in his 2009 book Vintage Spirits and Forgotten Cocktails. The good doctor mostly kept the recipe intact, but made one significant change: he subbed in raspberry syrup for grenadine. He argued that in the 1930s, grenadine and raspberry syrup were often treated as interchangeable, and raspberry syrup, well, tasted better. Since then the blinker has gained a steady reputation as a raspberry drink; so much so that some recipes associate the raspberry ingredient directly with the 1930’s original, skipping Haigh's alteration altogether.

It has become very popular to use raspberry jam or ice cream syrup for this drink. Haigh’s version is open ended, simply requesting “raspberry syrup”, but Chuck Taggert has confirmed several times that Haigh does indeed make the cocktail with the store bought stuff, so that is probably where the trend began. We have always found the best raspberry syrup is homemade. It is probably closer to what Duffy would have used (Smucker's products are mostly corn syrup) and exudes the heavenly taste of fresh berries. If the idea of a produce department frightens you, Small Hand Foods has an undoubtedly excellent raspberry syrup in their repertoire. The original version of this recipe does not specify a garnish, but we like to make it the way our favorite bar back in Brooklyn made it: with a generous grapefruit peel.